Concordia Professor Authors Book on the Life of C.S. Lewis 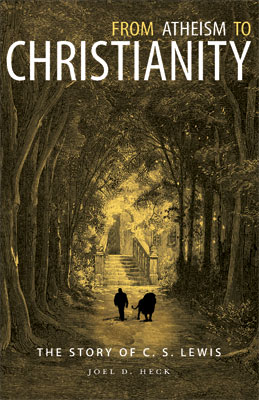 "I believe in Christianity as I believe that the sun has risen — not only because I see it, but because by it I see everything else."

"Faith is the art of holding on to things your reason has once accepted in spite of your changing moods."

"If you're thinking of becoming a Christian, I warn you, you're embarking on something, which will take the whole of you."

C.S. Lewis, one of the most quoted authors of our time, famous for “The Chronicles of Narnia,” made a difficult transition from atheism to Christianity before becoming the confident man of faith he was. Earlier this year, Concordia theology professor Joel D. Heck had his 14th book “From Atheism to Christianity: The Story of C.S. Lewis” published. Heck has researched events in the life of C. S. Lewis, catalogued day by day and year by year throughout Lewis' life, an extensive database of more than 1,100 pages of biographical information, called "Chronologically Lewis," that is available on his website.

“I think C.S. Lewis fans and anyone in the Christian or atheist community would enjoy this,” Heck said.

Heck, who describes Lewis as “the most dedicated and reluctant convert of all time,” writes on how Lewis became an atheist, how and why he came back to Christianity and what he subsequently thought about atheism, based on his own atheism as well as that of others. The book is largely biographical, examining Lewis’s atheistic years in more detail than has previously been done, using God’s four “chess moves” as the broad outline. The focus is on the years 1916 to 1931 in Lewis’s life.

“I think the great majority of atheists are truth seekers who adopted their position because they see a lot of what is going on in the world and think 'If there is a God, why does he allow these things to happen?’” Heck explained.

For those interested in getting a copy of From Atheism to Christianity: The Story of C.S. Lewis,” it is available at Barnes & Noble, Christianbook.com and via Amazon.

There will be a a book signing and a lecture at 3 p.m. on Wednesday, Sept. 27 at the Concordia Chapel.