“In the following directives I have no praise for you, for your meetings do more harm than good. In the first place, I hear that when you come together as a church, there are divisions among you, and to some extent I believe it. No doubt there have to be differences among you to show which of you have God’s approval. So then, when you come together, it is not the Lord’s Supper you eat, for when you are eating, some of you go ahead with your own private suppers. As a result, one person remains hungry and another gets drunk. Don’t you have homes to eat and drink in? Or do you despise the church of God by humiliating those who have nothing? What shall I say to you? Shall I praise you? Certainly not in this matter!” 1 Corinthians 11: 17-22 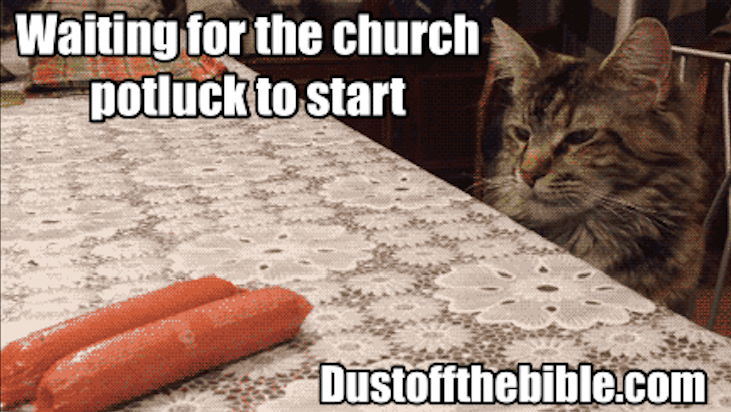 In the above passage, Paul is criticizing the Corinthians for embarrassing those who have nothing by eating and drinking to excess while the less fortunate went without. Early Christians came together for love feasts, which were followed by the Lord's Supper.

Some of the richer Christians brought a large quantity of food and wine and did not share their meal. This act not only shamed the poor, it meant some of the wealthier participants were taking part in the Lord’s Supper while intoxicated.

While Holy Communion was eventually separated from the love feast, many Christians, especially Lutherans, come together for potlucks. Eating with others conveys fellowship, trust and is reminiscent of these early love feasts. Sharing meals is a way to bond with brothers and sisters in Christ. For Lutherans, the potluck is practically its own sacrament.

Next time you wonder why you see 10 jello molds, 10 jello salads, 20 dishes made predominately out of cream of mushroom soup, very sweet tea, homemade lemonade (that tastes more like lemon water) and various plates of fudgey brownies and chocolate chip cookies, know that the food choices have been pounded into Lutherans who have probably attended more potlucks than they have graduations, weddings and birthday parties combined.

No one can put together a spread of more mismatched foods better than Lutheran!