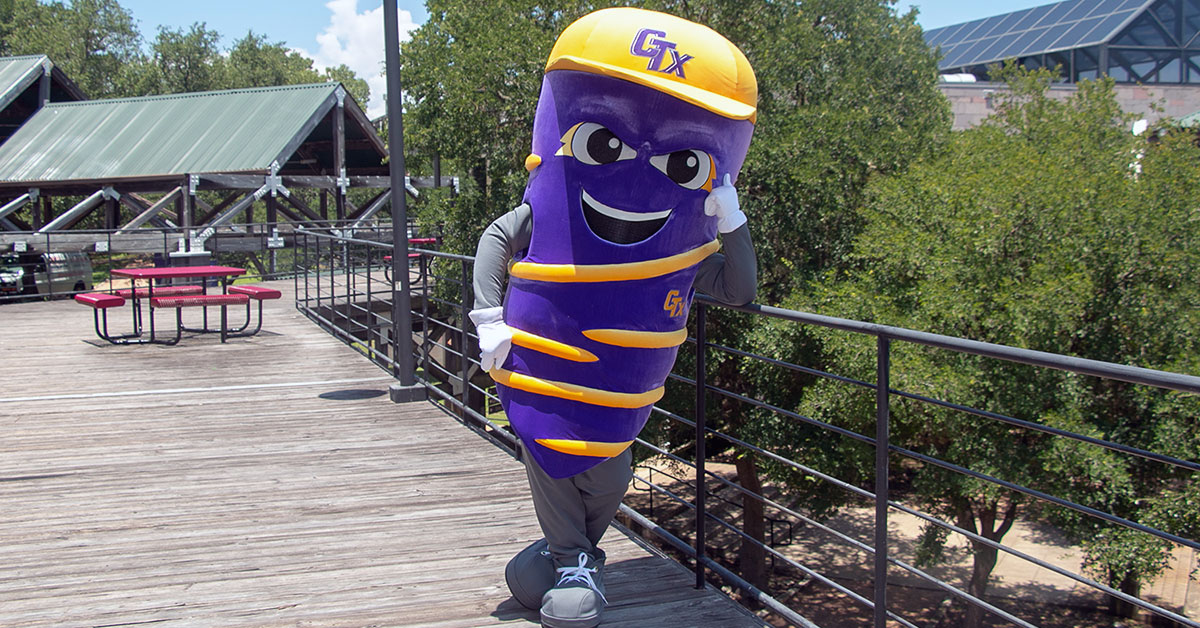 Woosh! It's me, VorTex. I'm the official mascot for Concordia University Texas. As an institution of higher education, learning is important to us. To celebrate continual learning, here is a list of 35 fascinating facts.

1. Alaska you a question

Alaska is the only U.S. state whose name is typed using one row of the keyboard.

2. Queen of the Land and the Engine

Queen Elizabeth II is a trained mechanic. She served as a member of the Women's Auxiliary Territorial Service during World War II.

The chicken came before the egg. Genesis 1:20-22 explains how God created every winged bird and then commanded them to multiply.

Peanuts are used to make dynamite. Their oil is extracted to make glycerol, from which the explosive compound nitroglycerine is obtained.

When a butterfly emerges from its chrysalis, its wings are small, and the butterfly cannot yet fly. The butterfly pumps fluids from its abdomen through veins in its wings to expand the wings to their full size.

6. Quite a Quizzical Query

Do you know the one letter that doesn't appear in a U.S. state name? "Q"

7. Look at What the Wind Blew In

The Windy City (Chicago) isn't named after its weather. Journalists coined the term in the 1800s to criticize the people in Chicago as "full of hot air."

9. Noodle Over This Fact

One strand of spaghetti is called a "spaghetto."

In 1958, high schooler Bob Heft designed the 50-star American flag that flies today. At the time, Alaska and Hawaii were not yet states, but Heft assumed they would become states, so he altered his family's existing 48-star flag to add two more stars.

His teacher gave him a B- at the time, but two years later, after President Dwight D. Eisenhower selected his flag's design out of 1,500, Heft's teacher changed his grade to an A.

The "#" symbol, commonly referred to as a hashtag or pound sign, is actually called an octothorpe.

President Theodore Roosevelt and his family had a variety of odd pets, including the following:

13. Talk About a Run-On Sentence

"Les Miserables," a novel written by Victor Hugo and adapted into a musical, has a sentence that is 823 words long.

14. Whatever Floats Your Goat

The pupils in goats' eyes are rectangular.

15. Lobster Dinner for Everyone

During colonial times in America, lobster was so plentiful, and therefore so cheap, that it was often served to prisoners.

You can't hum while holding your nose. To hum for an extended period of time, you have to exhale, which you can't do when both your mouth and your nose are closed.

Elvis Presley, renown for his distinct voice and jet-black hair, was a natural blonde. He began dying his hair black as a teenager with shoe polish.

The state of Texas is larger than any country in Europe.

"Y'all," a contraction of "you all," is synonymous with the American South, especially in Texas. But the earliest-known use of "y'all" is found in Englishman William Lisle's "The Faire Aethiopian."

A TI-83 calculator has six times more processing power than the computer that landed Apollo 11, the first spaceflight to land humans on the moon.

Since the end of World War II in 1945, all British tanks have been equipped with all of the items needed to make tea, including a boiling vessel that heats water.

This means that troops can stay in their tanks, keeping them protected from enemy attacks, while enjoying a fresh cuppa.

Bananas grow toward the sun against gravity, which gives the fruit its curved shape.

The University of Bologna, located in Italy, is the oldest university in the world. It was founded in 1088.

In an apparent quest to make things more complicated, the scientific definition of a berry excludes many fruits that are commonly called berries, such as strawberries and raspberries, and includes many unexpected foods, like bananas and tomatoes.

Scientists identify berries as a fruit that meets the following criteria:

According to the scientific definition, the following are berries:

According to this system, the items in the following list are not berries:

A group of lemurs is called a conspiracy.

30. Bridge in the Desert

The London Bridge that spanned the River Thames in London, England, from 1832 to 1968 was sold to Robert McCulloch, Sr., a chainsaw magnate who wanted to draw tourists to Lake Havasu City, the city he founded in Arizona.

The inside of the bridge is hollow and supported with a steel framework. The facade features the bridge's original granite blocks.

Calling "shotgun" is inspired by a time before automobiles.

A guard with a shotgun rode next to the driver of the stagecoach. These guards would keep robbers and criminals away, protecting the driver, passengers and cargo the stagecoach was carrying.

"Oxymoron" refers to a group of self-contradicting words, such as icy hot and seriously funny.

The word "oxymoron" is itself an oxymoron. Drawn from Ancient Greek, "oxy" means sharp, and "moron" means stupid.