9 Successful Inventions Made by Accident 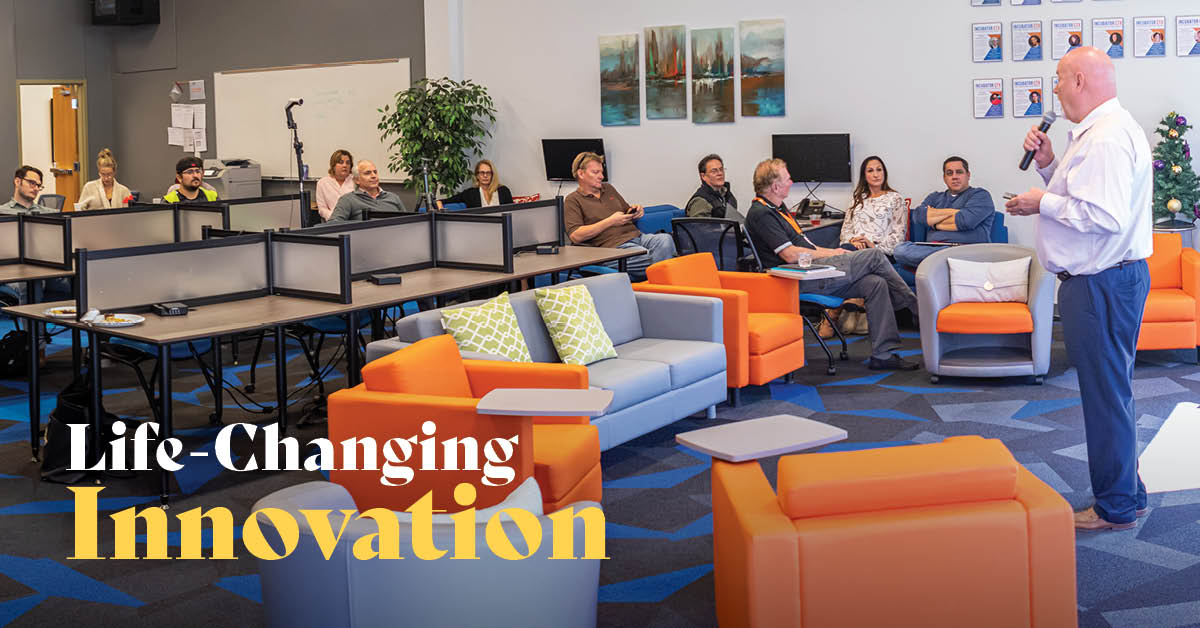 Concordia University Texas offers life-changing innovation in a variety of ways, including cutting-edge academic programs that equip you with relevant knowledge and skills. Plus, the on-campus entrepreneurial hub, IncubatorCTX, provides resources to help you put your original ideas and solutions into action.

An implantable pacemaker is a battery-powered device that is placed under a person's skin that helps the heart perform normally. The device sends electrical pulses to keep the heart beating at a regular rhythm.

In 1956, Wilson Greatbatch, an engineer, was working on a device to record the rhythm of a human heartbeat, but he used the wrong-sized resistor in the circuit.

The device created intermittent electrical impulses that closely mimicked the sound of a human heartbeat. While hospitals already had pacemaker machines, they were large, painful and immobile.

Greatbatch discovered that his invention could run electrodes directly to the muscle tissue of the heart, keeping a patient's heart on track. With such a device, patients who needed pacemakers would not have to remain at the hospital, and they wouldn't have to use the painful machines. So he worked on making the device small enough to fit inside a human body.

He collaborated with Dr. William Chardack of the Buffalo VA Medical Center and Dr. Ander Gage to implant the device in a dog. Then, in 1960, they implanted the first pacemaker into a man, prolonging his life by 18 months.

Known for the mesmerizing way it descends down stairs, the slinky was created by naval engineer Richard James, according to The Strong National Museum of Play.

Trying to develop a spring that would keep equipment steady on ships, James knocked the coiled metal off a ledge and saw the incredible effect it had.

He showed his wife Betty the accidental invention, and she had the idea to make it a toy.

A scientist named Dr. Spencer Silver was working to develop an incredibly strong adhesive in 1968. By accident, he created the exact opposite — an incredibly weak adhesive. Silver relentlessly shared his invention with colleagues, but he couldn't get traction to make it into a product.

One of his colleagues, Arthur Fry, came up with the idea of using the adhesive on bookmarks. Fed up with little papers falling out of his hymnal at church, he determined that Silver's invention was the solution.

They worked on developing a bookmark and, after notes on them, decided to make the product a new way to communicate.

After a successful market test in Idaho, 3M began selling the Post-it Note in 1979, and it rapidly grew in popularity.

According to The Strong National Museum of Play, this classic children's toy began as a household cleaning product. Invented by soap company Kutol Products, the organization was in danger of going out of business in the late 1920s. However, Cleo McVicker secured a contract with Kroger grocery stores to produce a ready-made wallpaper cleaner for their stores.

Using water, salt and flour, the company developed a malleable compound to clean wallpaper. While this kept the company afloat, Kutol Products faced plummeting sales again by the 1950s. McVicker's son, Joseph, was encouraged by his sister-in-law, Kay Zufall, to make the product a toy for children.

He visited her classroom to see the designs that the children made with the Kutol Products' wallpaper cleaner. He was convinced that this was the right way to pivot.

Altering the ingredients to remold the product into a toy, Kutol Products established Rainbow Crafts Company Inc. to sell Play-Doh.

Lacking an advertising budget, McVicker convinced Bob Keeshan, the star of a popular TV show called "Captain Kangaroo," to use the product on the show. Play-Doh was launched into the national spotlight, helping it become one of the most popular toys.

Cooking and serving all of the food for the guests, Ruth went to bake chocolate cookies for the guests, but she found that she was out of baker's chocolate. To improvise, she chopped up a Nestle semi-sweet baking chocolate bar, thinking that the chocolate would melt and spread into the batter.

The chocolate didn't melt into the batter, however, but just softened. Although it wasn't what she was planning, Ruth served the cookies, and they quickly became a hit.

She reached an agreement with Nestle, whose semi-sweet chocolate bar sales were growing rapidly. The company was allowed to print the "Toll House Cookie" recipe on their packages while supplying Ruth with all of the chocolate she needed. Sounds like a sweet deal!

After trying to make the bars easier to cut, Nestle transformed the product by making bags of semi-sweet chocolate morsels (chocolate chips) in 1939.

George de Mestral, a Swiss engineer, examined the pesky burrs that stuck to his clothes when he was walking his dog.

He found that the burrs had miniscule hooks that allowed them to easily stick to fabric and fur. God's design for the burrs inspired de Mestral to develop a fastening system that utilized the same concept. The resulting product came to be known as Velcro.

Fittingly, an 11-year-old boy invented this cherished children's treat. In 1905, Frank Epperson was going to make his own soda, filling a cup with powdered soda and water and putting a stirring stick in it.

Leaving the concoction outside overnight, the soda froze to become the first Popsicle. Nearly twenty years later, after successfully serving the frozen treats at a ball and an amusement park, Epperson received a patent for the Popsicle.

First called the "Eppsicle," Epperson's children began calling it "pop's sickle," leading to the famous "Popsicle" name. He sold the patent to the Joe Lowe Company of New York, which expanded the flavors.

Dr. Harry Coover was working on a research team at Eastman Kodak to develop clear plastics that could form precision sights for the U.S. Military's guns during WWII. The team unintentionally found a chemical compound that was incredibly sticky, but they disregarded it because it had no use for the gun sights.

In 1951, Coover was leading a project for the same company. This time, he and his team were looking to develop a clear and heat-proof material for jet plane canopies. One of the research students, ironically named Fred "Joyner," rediscovered the same formula Coover found in 1942.

After testing the product, it was deemed a successful solution. Coover finally brought the discovery to the attention of the company, which first sold the product in 1958.

It was a life-saving tool during the Vietnam War. U.S. soldiers used the glue to seal the wounds of injured soldiers.

Dr. Alexander Fleming was a famous Scottish bacteriologist. Returning from vacation, Fleming found cultures of Staphylococcus aureus in the lab, which he meant to throw away before he left. To his surprise, some of the cultures died.

Further investigation led Fleming to discover that a fungus, which had grown in the culture, destroyed bacteria. The type of fungus he found was a mold called Penicillium notatum.

First calling it "mold juice," Fleming rebranded it as "penicillin." It was the first antibiotic discovered and is a treatment that has helped save countless lives.