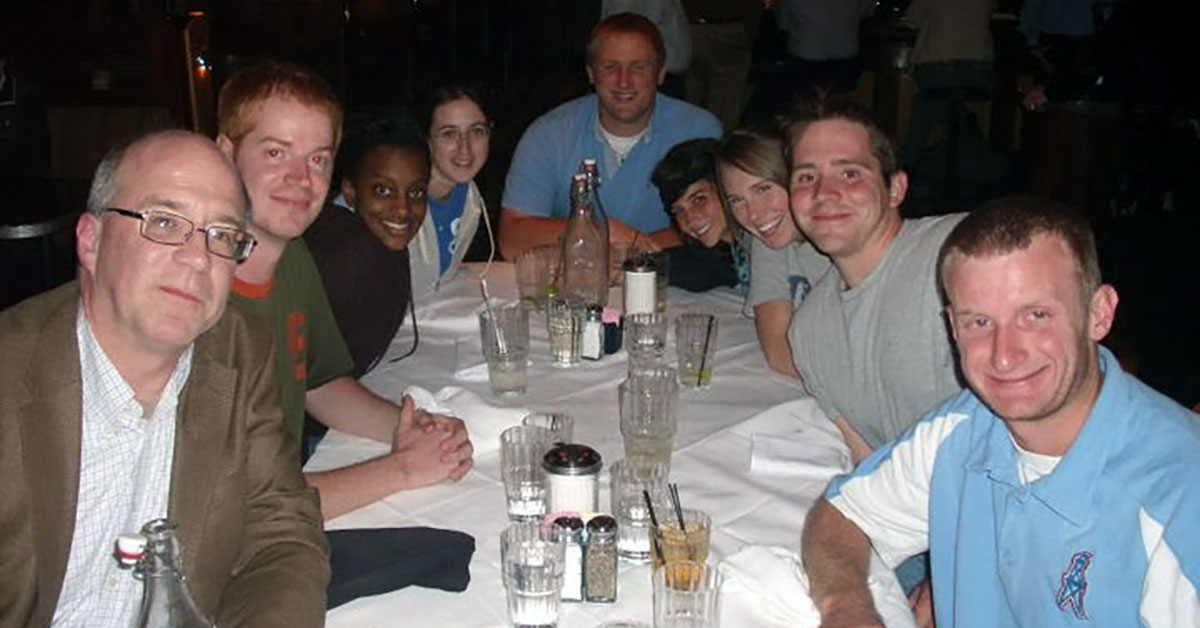 Tate Noster serves as the director of government services at KUNGFU.AI. He's a husband and father, a native of Austin, Texas, a graduate of Concordia University Texas ('10), and a leader.

Discover how his unique journey to earn his bachelor's degree from Concordia helped equip him with the skills to excel as a servant leader.

Not Yet Ready for College

After graduating from high school, Noster, a native Austinite, traded in his sunglasses for his heavy coat and started college at Concordia University River Forest (now Concordia University Chicago). However, he wasn't ready for school and didn't have the commitment required to earn a degree.

After going through academic probation, a dean at Concordia University Chicago informed him that he wasn't allowed to return.

Thankfully it wasn't all bad. Noster met his wife, Stacy, at the university.

After deciding not to pursue college further, Noster moved back to Texas and began work as a framer, a physically demanding manual labor job. The role put him, a red-headed man, working outside in Texas during the summer — not a good mix. One of his biggest job expenses was sunscreen.

He then found a job with the Internal Revenue Service (IRS), which offered him more consistency and, perhaps most importantly, air conditioning.

Noster then decided to return to college. He transitioned to the weekend shift at the IRS and applied to Concordia University Texas. 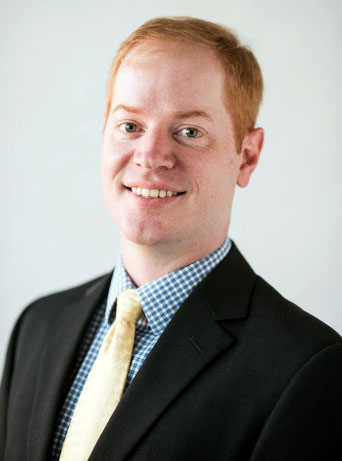 Enrolling as a transfer student, Noster was now committed to earning a bachelor's degree in Business Administration. At Concordia, he learned how to enjoy learning, and he made the dean's list every semester.

While completing his degree at Concordia, he also completed an internship with Apprentice Austin, working at UltraATS. The role sparked his interest in the defense industry, which he entered after graduation.

Many faculty members made an impact on Noster, including those now on Concordia's executive leadership team.

Dr. Don Christian, the president of Concordia, was the dean of the College of Business when Noster attended. "He had a special understanding that I was an older student transferring in," he explained. "I talked with him a lot, and as a Thrivent scholar, I got more face time with him."

Dr. Shane Sokoll, Concordia's chief strategy officer, served as one of Noster's professors. "His classes were very instrumental in helping me determine what I'm not good at, which is just as valuable," he said.

Learning to Lead at Concordia

While at Concordia, Noster learned about the idea of servant leadership, whereby leaders use their authority to serve those they lead, helping each team member grow and advance. Instead of focusing on gaining power, servant leaders focus on supporting their team.

"I learned about servant leadership in my classes and realized that this is what I enjoy doing," Noster explained," helping other people reach their potential and raising the total skill level instead of championing just one person."

During his undergraduate capstone course, Noster learned an important leadership lesson. Dr. Lynette Gillis, who now serves as Concordia's chief financial officer and VP of Finance, taught the class and challenged the students to come up with a project for the course.

Growing up, Noster helped build retaining walls to manage water flow on his family's property, so he utilized his persuasive skills to convince his classmates to build a retaining wall.

However, the project proved to be an absolute disaster; without proper direction, the class couldn't coordinate their efforts. Noster and his classmates then pivoted to power washing an outdoor basketball court, but he didn't receive the same buy-in from his classmates and had to complete part of the task himself.

It's a funny story, but it was also a good lesson. It taught me more about humility and recognizing that even if I know how to build a wall, people won't necessarily want to build it with me. Now when I'm excited about new projects, I first evaluate if people are on board. I always think, "Is this a rock wall?"

Grateful for Trials and Triumphs

At first, Noster viewed his time at Concordia University Chicago as a negative academic experience. But over time, he came to appreciate the struggles he had there.

"It is a good story because I met my wife there," he said.

Noster also appreciates the dean's choice to let him fail out of school. He wrote the dean a letter thanking him. "It was important to let him know that I knew it was a hard decision on his end, but if he hadn't let me fail, I wouldn't have taken a good direction," he said.

Beginning as a price and market analyst, Noster advanced to become a senior project manager and then the director of programs and strategic planning.

Leveraging the servant-leadership skills he developed at Concordia, Noster used his management positions to help his coworkers develop.

I saw a gap in finding managers that take time to understand what employees' goals are. Instead of asking them where they see themselves in five years, which people usually respond to with vague answers, I asked them how we could help make them successful. I got better responses by using this question.

Noster encouraged all of those he led at SPEC to take advantage of opportunities to further their careers, even if it meant leaving the company. "People know when you're genuine," he said, "and I was genuinely happy to see employees advance, even if they left, because they're growing."

He stays in contact with many of the people he's led over the years. "If you want to be a servant leader, you can be competitive, but collaboration is more in sync with your core ethos," Noster explained.

After gaining years of experience at SPEC, Noster decided to earn a Master of Business Administration (MBA) to advance his career.

He chose the University of Texas at Austin's (UT's) Executive MBA program because it aligned with his goals to continue to grow as a leader and access new opportunities.

Noster's Executive MBA experience was unique because halfway through the program, the COVID-19 pandemic hit, and the program transitioned from on-campus classes to online. The change was difficult for all the students, as they had to learn how to balance their families and jobs while shifting to a fully online format.

Once again, Noster leveraged his servant-leadership skills and took the initiative to ensure that everyone in the program was keeping up with coursework.

Recognized for Servant Leadership in the Executive MBA Program

His classmates and professors selected him for the Leadership & Service Award. Although he didn't make the highest grades in the class, he was committed to ensuring that everyone completed the program.

"I was willing to give up getting the best grades if it meant the teams I was on had the best outcomes," he said.

The Slack-er Award recognized Noster's work to organize everyone in the cohort, including those in different time zones. Additionally, Noster created a fun way to signal to professors that the class needed breaks during lectures.

"During full lectures, I wanted to make sure the professors kept taking breaks, so I got a stop sign to hold up," he explained.

Noster received help from his teammates to ensure everyone was succeeding and to connect students who were struggling with team members who could help them.

After graduating with his Executive MBA in 2021, Noster joined KUNGFU.AI as the director of government services. The artificial intelligence (AI) company helps organizations transform data into augmented capabilities to achieve goals.

Drawing from his experience, Noster provided helpful tips for college students, particularly students who transfer into Concordia and those who are going back to school to complete their degrees.

"You have to make an effort to apply, and you have to change things in your life to make education happen," he said.

You Have an Advantage in Class

Noster recognized that bringing work experience into class as a transfer student gave him an advantage over students who had not yet entered the workforce.

"You should be talking during class," he said, "realizing that you have a wealth of knowledge."

Apply What You Learn

When he first began school, Noster struggled to see the relevance of what he was learning. But when he returned as a transfer student, he had a greater appreciation for learning.

"To have a really good experience at college is to make what you're learning relevant to what you do or plan to do," he stated. "And learning doesn't stop after you finish school. The lessons get harder, and the outcomes aren't as clear in the real world."

Soft skills refer to your characteristics and personality, such as problem-solving and communication skills. Noster has hired dozens of people, and he determines their fit based on their personalities.

"Skills can be taught over time," he explained. "What I can't teach as a manager is things like enthusiasm and initiative."

When Noster hires people fresh out of college, he focuses on what they gleaned more than their GPA. He said, "I'm not as concerned with grades as much as what they learned and why it was important."

"School is stressful, and grades are stressful," Noster said, "but it's important to persevere and do your best so that you become a well-rounded person."

Because Concordia is a liberal art college, students have the opportunity to learn about a variety of industries.

“Finishing my degree at Concordia was the best decision I ever made," Noster said. "The tenets of servant leadership that I learned will forever be the basis of how I conduct myself and lead others.”