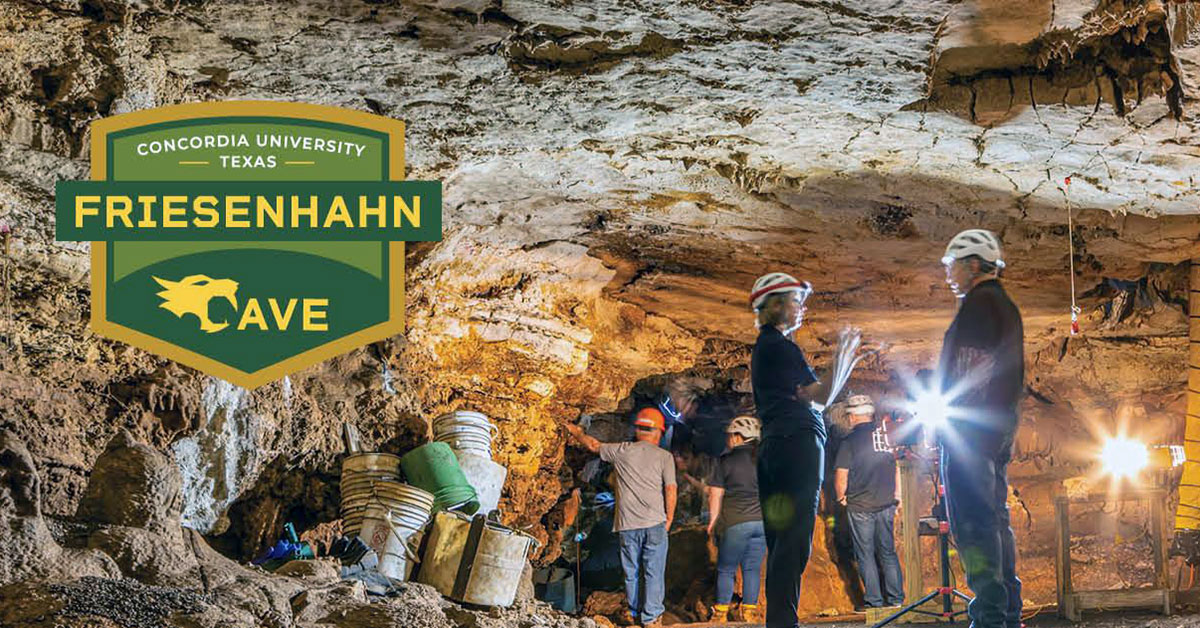 Concordia University Texas owns and manages Friesenhahn Cave, a world-renowned fossil site located in the hills of northern San Antonio. Excavators have found the bones of more than 30 genera of Ice Age mammals, reptiles and birds, including the scimitar-toothed cat Homotherium serum and mammoth Mammuthus columbi.

A recent paper published in Current Biology by the DeSantis Lab at Vanderbilt University confirmed the widely held assumption that the scimitar-toothed cats discovered in the cave ate juvenile mammoths.

Many are sharing news of this exciting and significant find, including the New York Times.

The paper "Dietary ecology of the scimitar-toothed cat Homotherium serum" was recently published in Current Biology. Dr. Larisa DeSantis from Vanderbilt University, Dr. Robert Feranec from the New York State Museum, Dr. Ernest Lundelius Jr. from the University of Texas at Austin and Mauricio Antón, a paleoartist, collaborated to produce the report.

These scientists are part of Concordia's informal “Friends of Friesenhahn Cave” group, which is comprised of scientists that have interest in unlocking secrets of the cave. DeSantis visited the cave site in 2017, and Lundelius is one of the early excavators of the cave.

The paper described the analysis of dental microwear textures of the teeth of Friesenhahn Cave’s scimitar-toothed cats in addition to assessing the stable isotopes of their tooth enamel to elucidate the hunting and feeding behavior of the cats. The scientists' research provides evidence to support the hypothesis that the Homotherium serum specimens found in Friesenhahn Cave ate tough flesh and open-habitat grazers, including juvenile mammoths.

This extraordinary finding helps form a clearer picture of the animals that once occupied Friesenhahn Cave.

Apart from the La Brea Tar Pits in California, it is believed that no other site in the United States has yielded a greater variety of significant Pleistocene vertebrate fossils than Friesenhahn Cave.

Concordia has managed the cave since 1997, after it was generously donated to the University to foster dialogue between scientists, educators, pastors and students. Dr. Larry Meissner, a professor emeritus at Concordia who was instrumental in the acquisition of the cave, has led the efforts to explore and preserve the site with the help of student groups, scientists, faculty, staff and other community members.

Since 2019, the recently established Friesenhahn Cave & Preserve Council of Concordia University Texas manages, preserves, protects and studies the cave and the surrounding property. The council is composed of faculty, staff and community members with various professional backgrounds. Dr. Jennifer Hofmann, an assistant professor of Biology and co-chair of the department, serves as the council coordinator.

"We have seen evidence of tooth marks on the mammoth fossils in the Friesenhahn collection, but this paper provides conclusive evidence that the Homotherium serum prayed on juvenile mammoths," Hofmann said.

Several institutions have been working with Concordia as the University moves forward with the preservation and continued excavation of Friesenhahn Cave. Dr. Emily Lindsey, the assistant co-curator of The La Brea Tar Pits & Museum in Los Angeles, is a member of the Friesenhahn Cave & Preserve Council, and she and her staff have been advising the University on best practices for managing fossil collections, how to preserve the cave and the path forward for future research.

View the Current Biology report to learn more about the exciting news!