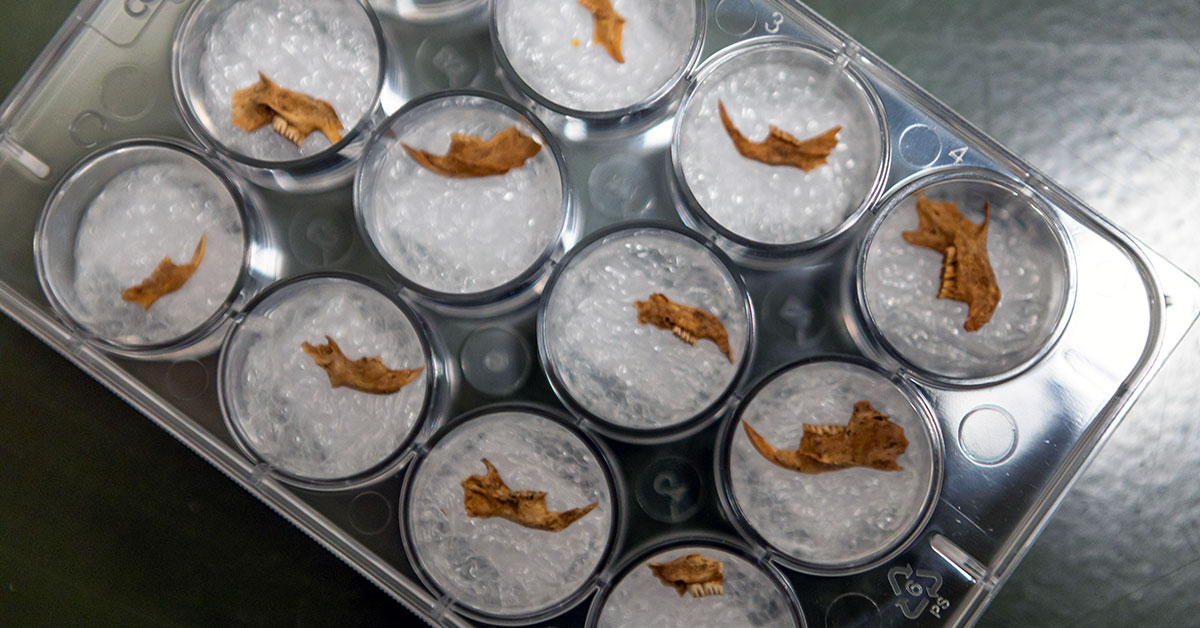 Anderson made three presentations to the community, centered around evidence that supports the creation account in the Bible and discounts major components of the evolutionary theory. His first presentation was the most unique and focused on dinosaur proteins.

Before we get to the dinosaurs, it's important to understand how the evolutionary theory's timeline, which alleges that the earth is millions of years old, came to be.

Anderson explained that evolutionary theory is based upon assumptions from geologist Charles Lyell, who wanted to get the Bible out of science and everything else. Lyell claimed that canyons, mountains, and other geological phenomena occur over long periods, and he advocated for a multi-million-year timeline. Anderson said that although Lyell's writings were uncredible from a geological perspective, his influence has carried on to today. Charles Darwin, attributed with developing the theory of evolution, was heavily influenced by Lyell.

According to Anderson and other Creationists, scientists accepted that the earth was millions of years old in the late 1800s, in efforts to discredit the Bible and to support their theories. "Evolution was designed for one purpose and one purpose only — to kick God out," Anderson said.

Although they accepted a timeline of millions of years in the 1800s, radiometric methods — the methods accepted by the scientific community to verify age — were not developed until the 1900s. Anderson said that the relative geologic timeline of millions of years was established decades before radioactivity was even discovered. Secular scientists even agree to this; it's stated in Growth of a Prehistoric Time Scale.

In 1907, the radiometric clock was established, but scientists didn't have the measurement equipment until the 1950s. Anderson argued that the multi-million-year timeline was not based on objective verification methods but was based upon the timeframe needed to support evolutionary theory.

Looking at the Evidence Objectively

Recent evidence found supports the biblical account of creation (an earth that is only thousands of years old), and Anderson believes it also discredits evolutionary theory.

Based on Lyell's work, many scientists assume that it takes millions of years for things like sedimentation, fossilization, canyon formation and river channeling to occur, but Anderson explained that their assumption is incorrect. Scientists have seen these events occur in very short periods. He gave the example of Mount St. Helens, where canyons form within hours.

Digging into the Evidence

Animal bones include living, soft tissue, such as collagen that's mineralized with calcium-phosphate crystals. Fossilization occurs when groundwater penetrates the bone, bringing in silica and washing out original calcium phosphorous. Over time, the living tissue is replaced with inorganic material from the surrounding rock in which the bone is buried. The bone becomes a rock that maintains the same shape of the original bone.

Recent finds support the Creationsit view that the earth is young, aligning with the biblical account of God creating the universe in just six days.

Soft Tissue in a T-Rex

In 2005, a group of scientists led by Dr. Mary Schweitzer found in-tact soft tissue in the femur of a tyrannosaurus rex (T-Rex). This major find was a direct biochemical challenge to the millions-of-years timeline assigned to fossils and rocks.

Soft Tissue in a Triceratops

During an excavation at the Hell Creek Formation in Montana, Anderson and his team find the brow horn of a triceratops encased in stone, laying just one foot below the ground. Sitting so close to ground level, the fossil was exposed to temperature fluctuations, rainwater, plant material and microbial activity. Another thing they found? Soft tissue with in-tact, membrane-coated proteins.

Anderson explained that the fastest way to destroy tissue and protein is to expose it to temperature fluctuations, so a bone exposed to natural elements for millions of years could not possibly contain soft tissue. "If you think that this horn is 68 million years old under these conditions with soft tissue discovered, I would have to believe that you've checked out of reality," he said. "I'm not ashamed to say it's a matter of the heart. You are turned against God if you think that it's millions of years old."

Multiple labs across the world have found fossils from various locations with pliable tissue, including proteins that are much more fragile than collagen, such as actin and myosin.

Collagen is the most durable protein in animal bones. All current studies show that, under ideal conditions, collagen will totally degrade in less than four million years. Additionally, exposure to ground radiation would have destroyed biological materials if they were in the ground for millions of years. The fact that scientists from around the world have found soft tissue in fossils from a variety of sites points strengthens the argument for an earth that's only thousands of years old.

Anderson believes that this ground-breaking evidence (pardon the pun) proves that the widely accepted fossil timeline and rock timeline are wrong.