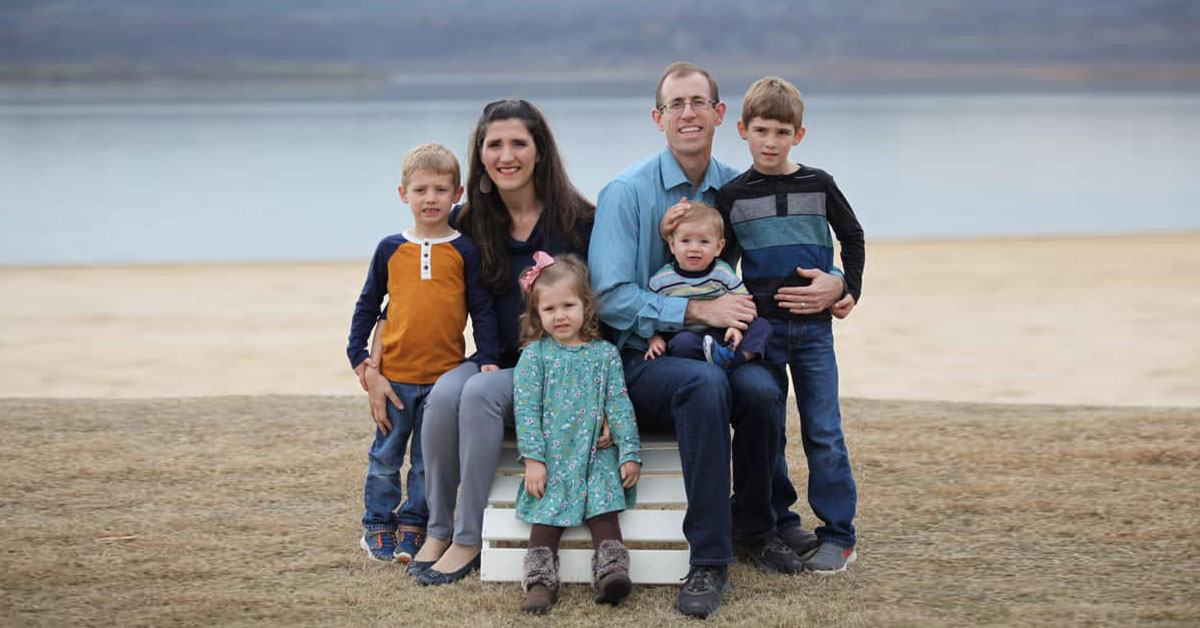 Rev. Dr. Christopher "Chris" Kennedy graduated from Concordia University Texas in 2004 and began his pastoral ministry in The Lutheran Church-Missouri Synod (LCMS) in 2008.

In His sovereign plan, God used Concordia University Texas to serve as the starting point of Kennedy's ministry, through which he has impacted others for Christ and written two books to bless others.

Kennedy spent his first two years of college at the University of Texas at Arlington. Planning to become a newspaper reporter, he majored in Journalism and developed valuable skills that he continues to utilize.

After God led him to consider the ministry, Kennedy decided to go to seminary. He transferred to Concordia University Texas to complete his pre-seminary work, including Greek, Hebrew and Biblical studies.

"I can't say enough good things about Concordia," Kennedy stated. "I got so much more than I expected."

Attending CTX when it was at the historic downtown Austin location, Kennedy lived on campus in Harms Hall. His parents' home in the Dallas-Fort Worth area backed up to a major interstate, so seeing the double-decker Interstate 35 from the dorm made him feel at home.

One year, he was roommates with Rev. J Brown, the director of Church Relations and the Pre-Seminary program at Concordia.

Getting Involved on Campus

Kennedy immediately made friends and got involved on campus. He played ultimate frisbee, joined an intramural basketball team, worked in the campus mailroom, graded papers for a professor and more.

In addition to joining the student government his senior year, he was selected to serve as the student ministry director, put in charge of the student-run night chapel services (now known as The Refuge).

In this role, Kennedy led a team of students and would talk in front of groups of people, which was ideal preparation for his future pastoral ministry.

"One of the helpful things at Concordia was the opportunities I was given to lead and be in front of people," he said. "It helped me dispel lies about myself. I give Concordia a lot of credit as one of the ways God worked in me over the years." 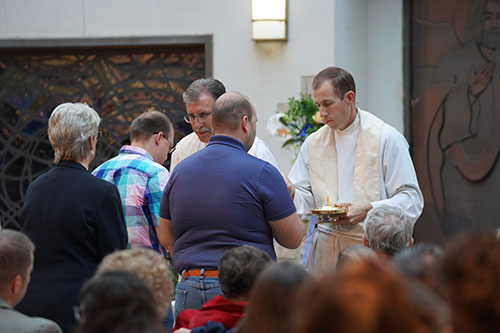 After graduating with a Bachelor of Arts in Communication from Concordia University Texas in 2004, Kennedy attended Concordia Seminary in St. Louis, Missouri, where he earned his Master of Divinity.

In 2014, he was called to his current role as the senior pastor of Shepherd of the Hills. "It is great to get paid to study the Bible," Kennedy said. "I learn a lot about people, a lot about myself, and how to help people in different situations. I get to open up God's Word to research and learn."

The school is a major part of the church. Shepherd of the Hills Lutheran School & Childcare serves children from infants to the 8th grade and consists of a fully accredited National Blue Ribbon School of Excellence and a state-licensed early childhood center.

"We have a wonderful congregation," Kennedy said, "and there are wonderful strengths the school ministry brings. There is a healthy partnership between the church and the school."

After joining Shepherd of the Hills, Kennedy married his wife, Ashley, and they have four children.

"My family gives me joy," Kennedy said, "and that joy carries into my work. They are God's gifts to me. I'm very grateful for my wife and our children."

Ministering in the Pandemic

The COVID-19 pandemic has brought unique challenges to churches, but Kennedy and his team have found safe ways for the Shepherd of the Hills congregation to attend church in person.

"Some great leaders have helped restructure the church to make it COVID safe," he explained. "We've developed creative ways to carry out ministry. God has guided us through this by some wonderful people inspired by the Holy Spirit."

The church offers both indoor and outdoor services. In addition to wearing masks, Shepherd of the Hills indoor attendees sit in every other pew and regularly sanitize their hands.

For outdoor attendees, the parking lot becomes an outdoor chapel. Kennedy stands atop scaffolding and preaches into a microphone, which is transmitted to an FM radio station that attendees can play in their vehicles.

The pandemic has forced Shepherd of the Hills to develop an online ministry. Each week, the church publishes digital content, including weekly interviews with congregants, the Shepherd Podcast, devotions and more.

"I believe that God is doing something new in this," Kennedy explained. "I hold onto Romans 8:28. I see God's hand in this, taking a bad thing and making good things for the church." 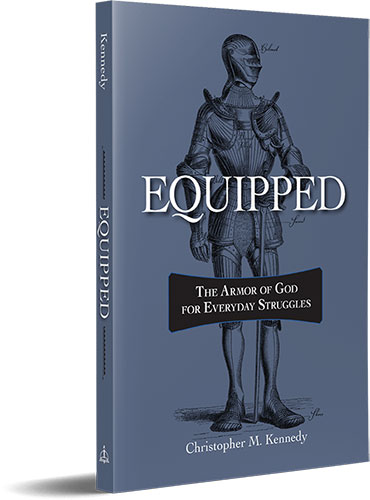 Kennedy's new book, "Equipped: The Armor of God for Everyday Struggles," was inspired by his personal struggles. Engaged in spiritual warfare, Kennedy developed a sermon series to identify the armor that God equips believers with, described in Ephesians 6.

Pouring his heart into the sermon series, Kennedy received positive feedback, and many asked for copies of his sermons. So he decided to put his sermons together into a book.

"Spiritual warfare is a daily reality for all of us," Kennedy said. "I believe God wants to equip all of us with the tools He provides, and I think this book would be a blessing and an encouragement to anyone. I hope that many people are blessed by the book."

He leveraged the skills he learned while studying journalism, including writing, researching, interviewing and meeting deadlines.

"God really shaped me through my journalism education," Kennedy said. "He already had in mind that I would be in the ministry."

Kennedy writes his sermons in word-for-word manuscripts. Having already researched and preached the content, he made each sermon into a chapter and expanded upon them. For the two weeks he didn't preach during the series, Kennedy utilized previous sermons he delivered on the topics.

After earning his Doctor of Ministry from Austin Presbyterian Theological Seminary in 2017, Kennedy self-published his first book, "Ancient Truths for Modern Times: What Christians Believe and Why It Matters," in which he walks readers through the Apostle's Creed. His wife, Ashley, designed the cover.

Planning to self-publish his new book, he gave it to four people to review. One person suggested that he send it to Concordia Publishing House, the publishing arm of the LCMS.

Concordia Publishing House agreed to publish Kennedy's book and suggested that he add the "Storehouse of Spiritual Weaponry" section at the end of the book. The section provides an inventory of Bible verses by topic, hymns, prayer and a faith affirmation statement to help readers remember certain truths.

"This book is a tool for ministry, just as much as a sermon is," he said. "This is a tool to make an impact on others and share Christ with them."

Kennedy is now working on his second book for Concordia Publishing House.

You can purchase "Equipped: The Armor of God for Everyday Struggles" through Concordia Publishing House or Amazon. 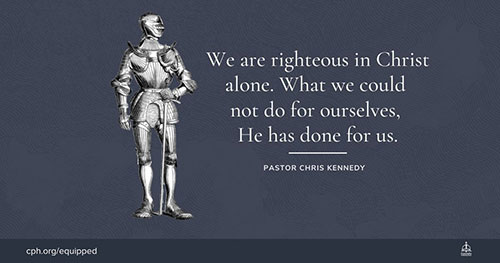 Kennedy understands the pressures and stresses that those in church work experience.

"I believe that the devil works the hardest where he stands to lose the most," Kennedy said. "When we have people passionate about sharing the gospel, he will attack fiercely. Stick with it, and don't give up. Keep going."

Kennedy encourages those in the ministry to surround themselves with people who will encourage them in their faith.

"You are making an eternal impact on lives," he said. "I can't overstate the importance of a career in church work."

We congratulate Chris Kennedy on his new book!

Learn more about the Pre-Seminary program at Concordia University Texas.