Over ten years ago, Water to Thrive set out to bring change and provide clean water to those who need it most. CTX Service-Learning has partnered with Water to Thrive since they first began, and as a campus community, we have raised funds for the building a total of FOURTEEN wells! These wells are changing thousands of lives in rural Africa. Below are some highlights from some of our past well campaigns. Join us for our latest campaign!

During the 2013-2014 academic year, we raised money to fund three new wells through the Jubilee Well Campaign. Thank you to all of you who generously supported this campaign!

In 2009, the first $3500 raised by the Concordia community supported a hand dug well for the Sudi primary school in Sudi, Ethiopia--a rural town of 2164 people and 1202 school-age children. These children are served by one school which formerly lacked adequate sanitation or drinking water for the students. We also raised funds to buy new desks and chairs for this school in the spring of 2011. 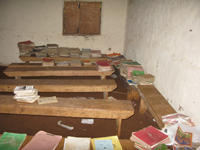